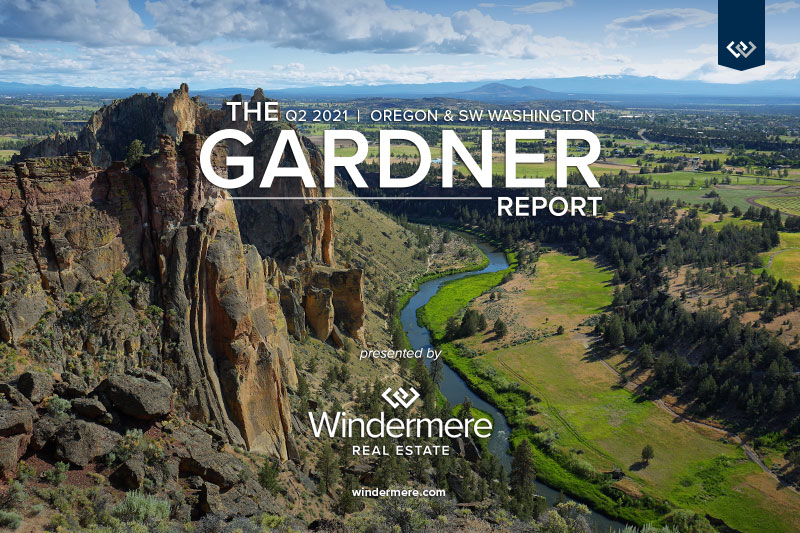 The following analysis of the Oregon and Southwest Washington real estate market is provided by Windermere Real Estate Chief Economist Matthew Gardner. We hope that this information may assist you with making better-informed real estate decisions. For further information about the housing market in your area, please don’t hesitate to contact your Windermere Real Estate agent.

The recovery of the jobs lost due to the pandemic continued in the second quarter, but at a significantly slower pace than in the first quarter. Of the more than 285,000 Oregon-based jobs shed during the pandemic, 181,800 have now returned. Though this is positive, state employment is still down more than 100,000 jobs. As I predicted last quarter, it is now clear that Oregon’s efforts to pull back on reopening due to rising COVID-19 cases slowed the velocity of the job recovery, but there was growth in the second quarter.

In Southwest Washington, 16,980 of the more than 22,000 jobs that were lost have returned, and they are returning more quickly than in Oregon.

More hiring has allowed the unemployment rate in Oregon to drop from 6% at the end of the first quarter to 5.6% in June. The jobless rate in Southwest Washington currently stands at 6%, its lowest level since the pandemic took hold.

❱ The largest increase in sales from the first quarter was in the greater Portland metro area, but all counties contained in this report experienced more transactions.

❱ Sales rose in every county other than Tillamook compared to a year ago, but this is a very small market that regularly experiences extreme swings in the number of sales. In markets where sales rose, all but two of them saw double-digit gains.

❱ Demand remains strong but supply is still lagging. More buyers are getting off the fence after mortgage rates rose in the first quarter. Although rates have pulled back somewhat, the specter of them rising has generated a lot of competition for the homes that are available. 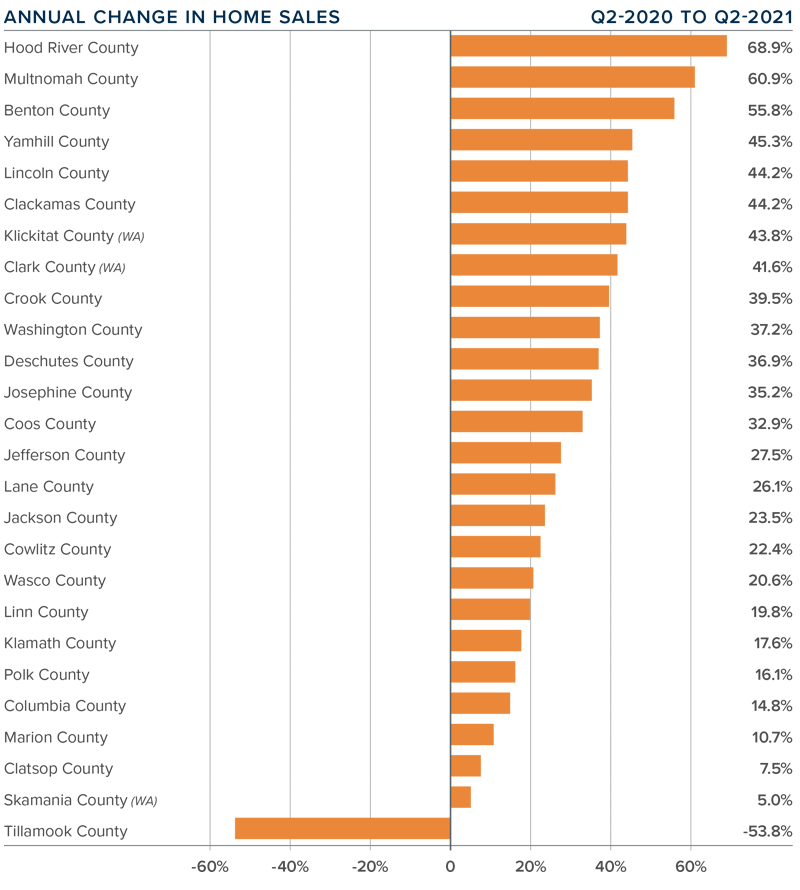 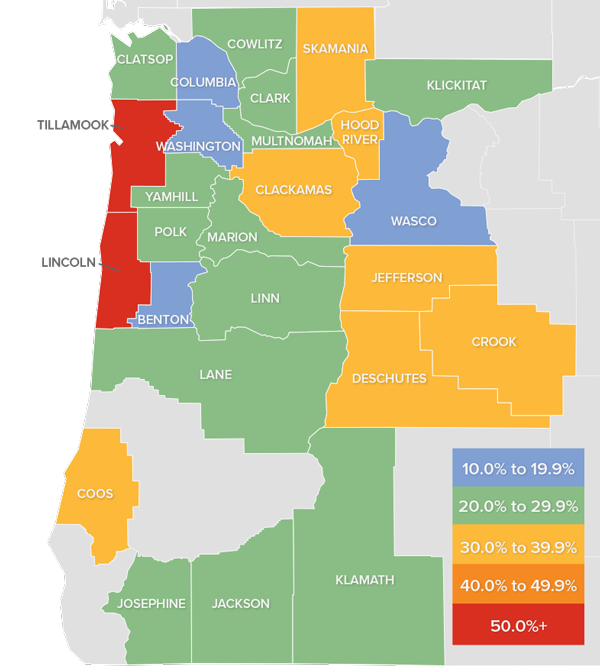 ❱ Relative to a year ago, Tillamook County again led the market with the strongest annual price growth, but it is a very small market prone to significant swings. The most expensive market was Hood River County, where the average sale price was $728,700.

❱ All counties contained in this report saw prices rise more than 10%. Prices in Jackson, Klickitat, and Wasco counties were lower than in the first quarter, but I do not see this as being pervasive and I expect them to pick back up as we move through the rest of the year.

❱ Prices continue to rise at an astonishing pace, but many areas are hitting an affordability ceiling. This, in concert with modest increases in mortgage rates, is likely to temper price growth—but just not yet. This year, prices will continue to increase at well above the long-term average. 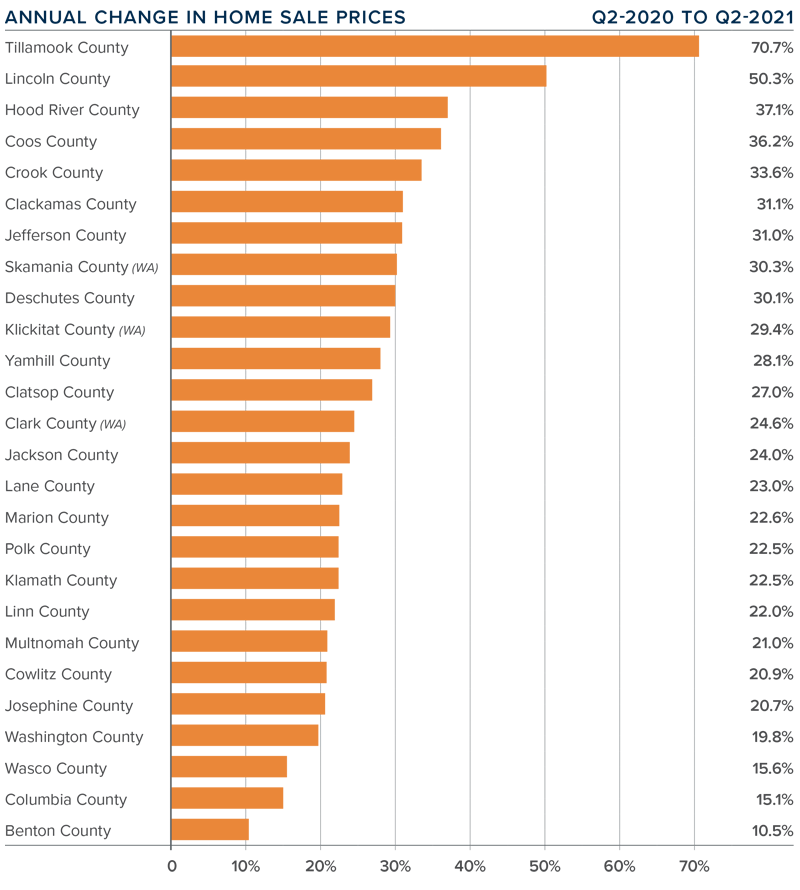 ❱ The average time it took to sell a home in the second quarter of 2021 was 35 days.

❱ With the exception of Benton County, which was up nine days, every county saw the length of time it took to sell a home drop compared to a year ago. Benton was also the only county that saw market time rise compared to the first quarter of 2021.

❱ Homes again sold the fastest in Washington County, where it took only 11 days for the average home to go under contract. An additional 16 counties saw the average market time drop to below a month. 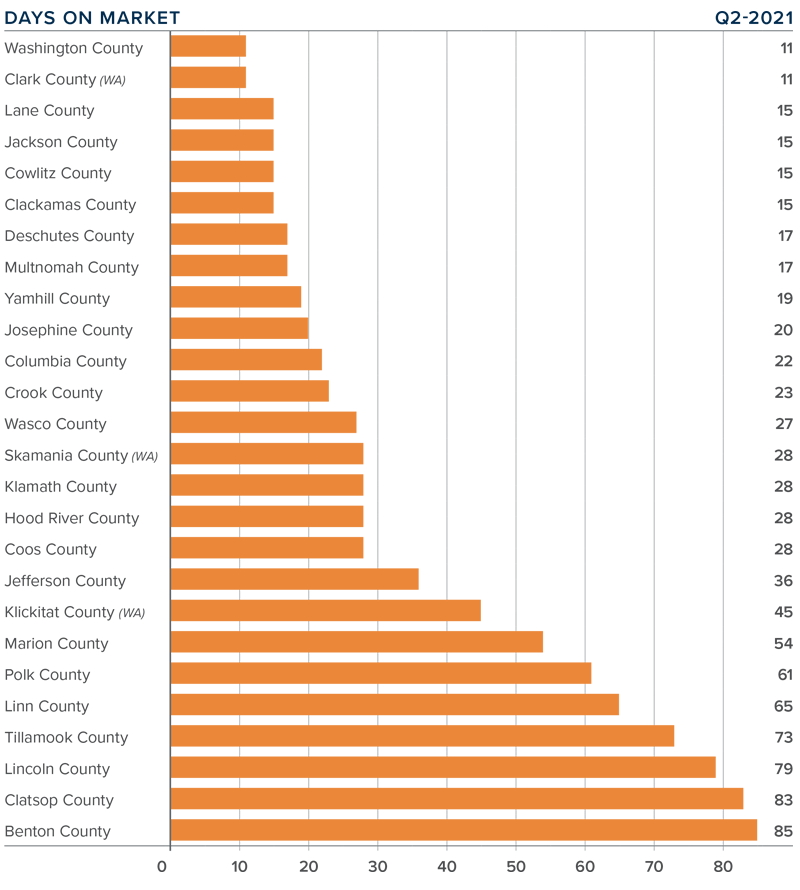 Home sales continue to grow, and robust demand is causing prices to rise significantly, resulting in a market that strongly favors sellers. The additional supply of homes that I’m predicting for 2021, combined with modestly rising interest rates, may start to slow the momentum in price growth, but for now I have moved the needle further in favor of sellers.

As Chief Economist for Windermere Real Estate, Matthew Gardner is responsible for analyzing and interpreting economic data and its impact on the real estate market on both a local and national level. Matthew has over 30 years of professional experience both in the U.S. and U.K.

Related Articles
Bene's Blog What You Want To Know If You’re Pursuing Your Dream of Homeownership If you’re a young adult, you may be thinking about your goals and priorities for the months and years ahead. And if homeownership ranks high on your goal sheet, you’re in good company. Many of your peers are also pursuing their dream of owning a home. The 2022 Millennial & Gen Z Borrower Sentiment Report from Maxwell says: “Many young adults […]
Bene's Blog What’s Ahead for Mortgage Rates and Home Prices? Now that the end of 2022 is within sight, everyone is asking what’s going to happen in the housing market next year and what that may mean if they’re thinking about buying a home. Here’s a look at the latest expert insights on both mortgage rates and home prices so you can make your best […]
market news Why the Forbearance Program Changed the Housing Market When the pandemic hit in 2020, many experts thought the housing market would crash. They feared job loss and economic uncertainty would lead to a wave of foreclosures similar to when the housing bubble burst over a decade ago. Thankfully, the forbearance program changed that. It provided much-needed relief for homeowners so a foreclosure crisis wouldn’t happen […]