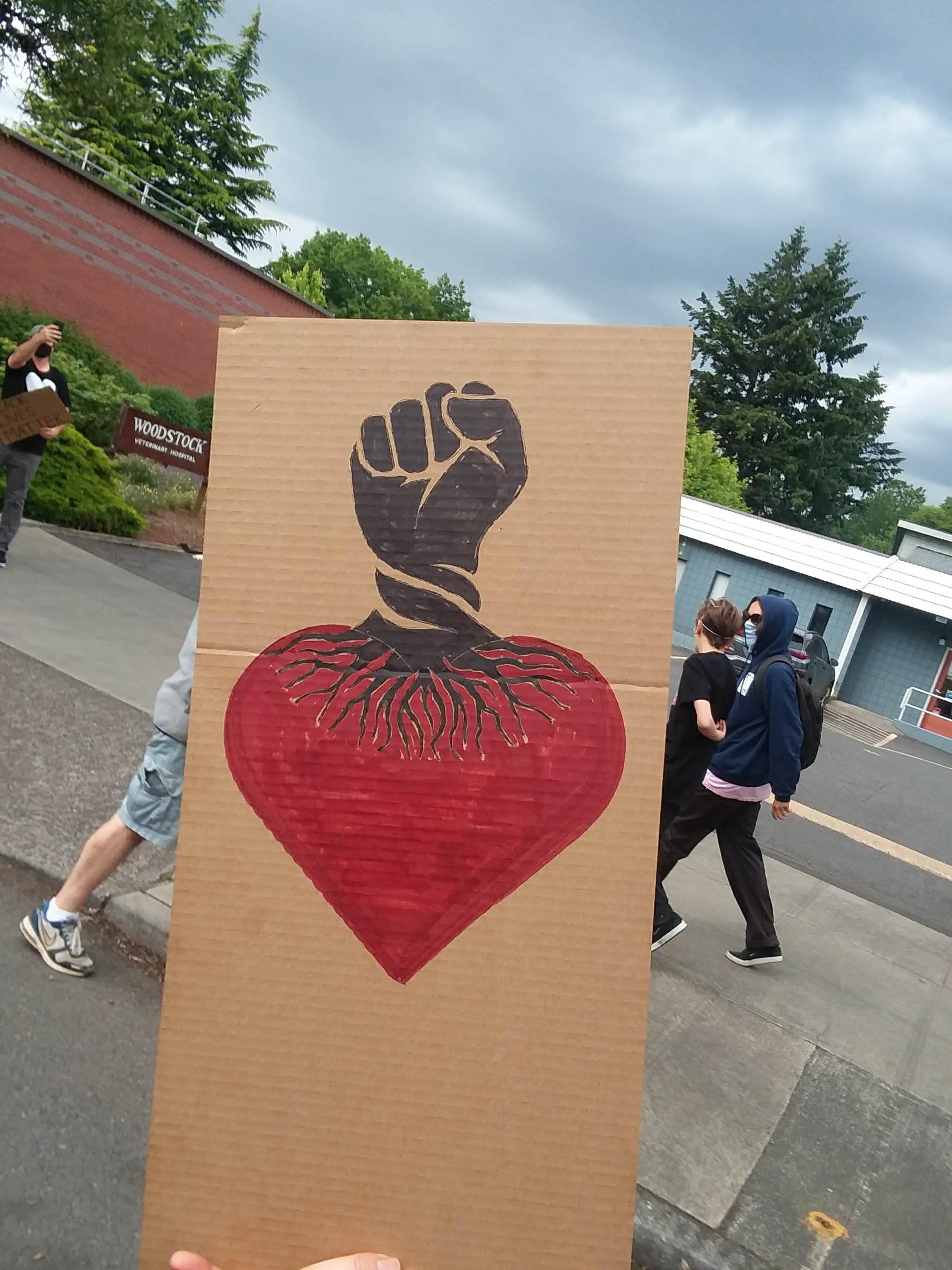 There have been protests and marches all across the country in response to the murder of George Floyd by police officers in Minneapolis.  I have a thirteen-year-old who began asking daily if I could take him to the protests in Portland.  Because of the large police presence and the threat of violence, I hesitated taking him to the larger protests and was waiting for a vigil or smaller demonstration.  The Woodstock community came through. Woodstock Facebook

On Friday at 5:00 my son and I made our way to Woodstock Boulevard to meet up with what I assumed to be a small group of like-minded Portlanders from the Woodstock neighborhood.   Everywhere we looked we saw families walking in the same direction, some toting handmade signs.  Faces covered with masks, we arrived at the starting point to find the church parking lot overflowing into the street and people swarming toward us.

The march began moments after we arrive and the organizer, carrying a huge rainbow flag began to lead the procession down the sidewalk.  It took him about a block before he realized that walking on the sidewalk was never going to work with the amazing turnout of people.  We took over the street and stopped traffic, sometimes in both directions, for the next 10 blocks.  When we looped back around we could see that the people continued to come, so that 10 city blocks were full of protesters chanting, moving in both directions.   I marveled over it again and again, how did our little neighborhood gather so many of us together?  Once again, I fell in love with my neighborhood.

The only disappointment was that we did not march into the next neighborhood.   Not far from us, on Reed College Place, artists and volunteers have put up an amazing memorial.  The avenue is split down the middle and has a grassy median with evenly spaced trees on either side and a dirt path going between them.  This mile-long street has a sign on every tree spelling out the names of people of color who had their lives taken from them by the police.  It must have been a huge undertaking and would have made for an even more powerful march. As of this writing, it is still up.  If you haven’t seen it, it is worth the trip.

These protests are long overdue and are really beginning to wake up whites to their privilege.  I was working up the nerve to bring some of this to the attention of my Principle broker and to ask if there was something we could do in our own office.  I didn’t have to.  At our meeting this week he brought it up and we are now working on bringing in some educators to help us start thinking about our own privilege and how it affects others.  I loved how one person said that they didn’t know how to show their support in case they offended someone and another answered, “We need to be okay with being uncomfortable, some people don’t have that choice.”  These conversations are pretty common in educational settings, but it is great to finally see them happening in the workplace.

Related Articles
buyers Owning Is More Affordable than Renting in the Majority of the Country If you were thinking about buying a home this year, but already pressed pause on your plans due to rising home prices and increasing mortgage rates, there’s something you should consider. According to the latest report from ATTOM Data, owning a home is more affordable than renting in the majority of the country. The 2022 Rental Affordability Report says: “. . . Owning a median-priced home […]
Uncategorized 3 Charts That Show This Isn’t a Housing Bubble With home prices continuing to deliver double-digit increases, some are concerned we’re in a housing bubble like the one in 2006. However, a closer look at the market data indicates this is nothing like 2006 for three major reasons. 1. The housing market isn’t driven by risky mortgage loans. Back in 2006, nearly everyone could […]
market news 6 Reasons to Celebrate National Homeownership Month Our homes are so much more than the houses we live in. For many, they’ve also become our workplaces, schools for our children, and safe harbors in which we’ve weathered the toughest moments of a global pandemic. Today, 65.6% of Americans call their homes their own, a rate that has risen to its highest point in 8 […]